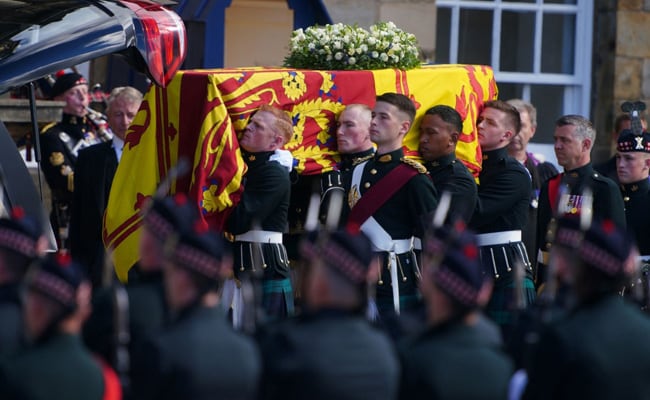 London: Queen Elizabeth II’s coffin, which will lie in state in London for four days later this week before her funeral next Monday, was reportedly crafted more than three decades ago.

The casket will rest closed on a raised platform known as a catafalque inside Westminster Hall — the oldest part of the centuries-old parliamentary estate — from Wednesday, after lying at rest in Edinburgh for a day from later Monday.

Here are more details about the coffin of Britain’s longest-serving monarch:

The queen’s coffin was made at least 32 years ago of English oak, which is increasingly rare these days with most wooden caskets now made from American oak, The Times reported Monday.

It is lined with lead, a royal tradition to help preserve the corpse for longer after its burial in a crypt — on this occasion inside the King George VI Memorial Chapel at St George’s Chapel in Windsor, west of London.

Lead is said to make the casket airtight, helping to stop moisture from getting in but making it significantly heavier. The queen’s coffin requires eight pallbearers to move it.

It matches another made for the late queen’s husband, Prince Philip, who died last year and was interred at the crypt where she will soon be buried alongside him.

Leverton & Sons, the London undertakers for the royal family since 1991, told The Times they inherited the coffins at that time and are unaware who had crafted them before then.

“It is made from English oak, which is very difficult to get hold of,” Andrew Leverton, who runs the company, added to the newspaper.

“I don’t think we could use American oak for a coffin now. It would be too expensive.”

The coffin has been specifically designed to hold precious fitments securely on its lid.

At the lying in state and funeral, that will include the Imperial State Crown, orb and sceptre, representing different aspects of the sovereign’s powers.

Meanwhile, the brass handles on the coffin are also uniquely designed for royal caskets, with a company in the central English city of Birmingham responsible for them, according to The Times.

“It is not something you can just make in a day,” noted Leverton.

Queen Elizabeth II’s coffin first emerged on Sunday, covered with the Scottish royal standard and a wreath of white heather, dahlias and sweet peas from the gardens of the Balmoral estate where she died Thursday.

It rested overnight Sunday in the Palace of Holyroodhouse in the Scottish capital Edinburgh.

On Monday, it travels by hearse — followed by a procession including King Charles III and other senior royals — to St Giles’ Cathedral on the Royal Mile, where it will remain for 24 hours.

It will then travel by a Royal Air Force plane to London, where it will sit at Buckingham Palace before being transferred to Westminster Hall on Wednesday.

With Eye On China, G7 To Announce New Measures On Russia Over Ukraine War