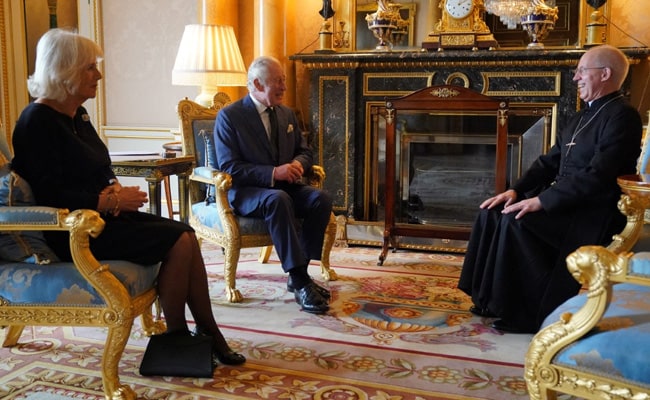 King Charles III on Tuesday raised a fraught post-Brexit impasse between the United Kingdom and the European Union during a meeting with Northern Ireland’s feuding political leaders.

The new British monarch met the leaders at the royal estate of Hillsborough Castle as part of a UK tour following the death of his mother, Queen Elizabeth II.

In a speech at Hillsborough, Charles pledged to “seek the welfare” of all Northern Ireland’s divided communities, stressing the queen had “never ceased to pray for the best of times for this place and its people”.

He held a reception with the party leaders after the speech, including the pro-UK Democratic Unionist Party’s Jeffrey Donaldson and Michelle O’Neill of Sinn Fein, which wants unification with Ireland.

Charles expressed keen interest in the issue of the Brexit-related Northern Ireland Protocol, engaging in a lengthy conversation with Donaldson over the issue, the domestic PA news agency reported.

Donaldson said he was hopeful that on-off talks with the EU over reform of the protocol would “progress”, it reported, without quoting sources.

Sinn Fein emerged on top in Northern Irish elections in May, but the DUP has refused to let the regional assembly reconvene unless London and Brussels abandon the protocol.

The pact entails checks on goods entering Northern Ireland from mainland Britain, prompting the DUP to fret that the territory is being gradually hived off from the UK.

But Donaldson welcomed conciliatory noises from the EU over potential changes to minimise the checks, PA said, as the new UK government presses legislation to overhaul the protocol on its own.

After Hillsborough, a religious service was held in Belfast where Charles shook hands with Irish President Michael D. Higgins, in the king’s first meeting with another head of state.

The Sinn Fein speaker of Northern Ireland’s Stormont assembly, Alex Maskey, gave a reading at the service, before the king met well-wishers outside the cathedral and flew out to London.