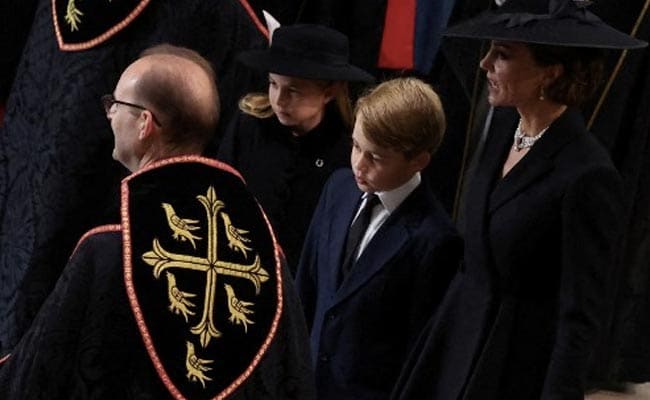 London: Queen Elizabeth II’s great-grandchildren George and Charlotte attended her funeral Monday, signalling the more prominent role they will now play as the children of the first-in-line for the throne.

The two eldest children of the Prince and Princess of Wales joined the funeral procession as it entered Westminster Abbey.

George, now second in line to the throne, wore a dark suit and tie while Charlotte wore a black dress and hat. Their younger brother Louis, four, did not take part.

The children were shown attentively looking at the order of service, seated with their mother and father, and following the coffin out of the cathedral.

While the children are much younger, the scene evoked memories of William and his brother Harry walking behind the coffin of their mother Diana, princess of Wales, in 1997, when they were aged 15 and 12 respectively.

William told members of the public that walking behind the queen’s coffin when it was taken in a procession from Buckingham Palace to Westminster Wednesday had “brought back a few memories” of that event.

While British media does not show William and Catherine’s children going about their ordinary lives, the two eldest children have been in the spotlight as they attended major public events recently.

At celebrations for the queen’s Platinum Jubilee in June, they looked at times extremely bored during an open-air concert featuring ageing pop stars outside Buckingham Palace.

George also went to the European Championship final at Wembley with his parents in July, jumping for joy when England scored and wearing a double-breasted jacket and tie, an outfit that was a miniature version of his father’s.

All three children recently started a new school together in Windsor after their parents opted to make their main home there this summer in a relatively modest mansion without live-in servants.

They attend a costly private school with spacious grounds that include a golf course.

Greek Rescuers Save More Than 100 Migrants In The Aegean

US To Reduce Nicotine In Cigarettes To Non-Addictive Levels: Report