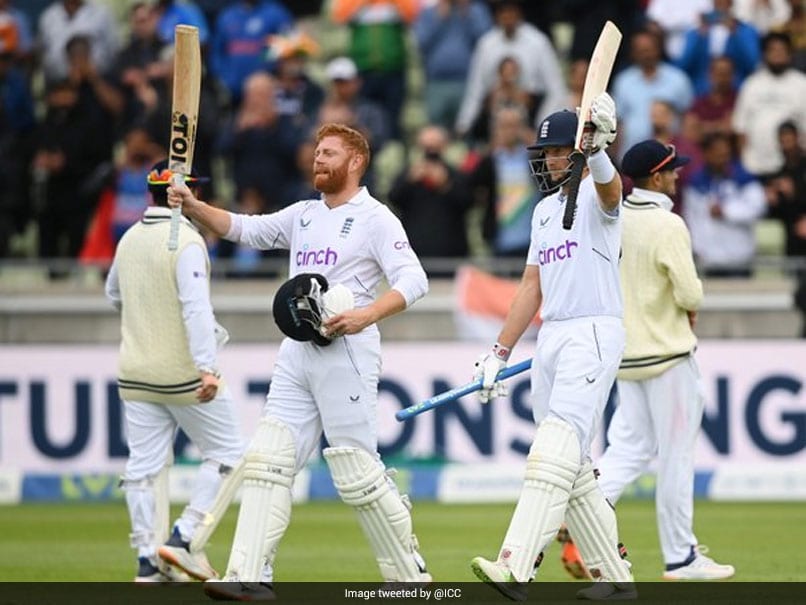 Jonny Bairstow and Joe Root, who have made chasing tricky targets in Test matches fashionable, put famed Indian pace attack to sword with imposing hundreds as England recorded their highest ever chase of 378 runs with minimum fuss to level the five-match series 2-2. It is fourth straight successful chase for England, having accomplished tricky fourth innings targets of 278, 299, 296 against New Zealand in the previous series. For India, the ignominy was of not being able to defend their highest fourth innings target.

When England were rattled on the fourth afternoon by stand-in skipper Jasprit Bumrah, the two star batters didn’t waver from their game plan. The entire Indian attack, except Bumrah, looked pedestrian. All England needed was just under 20 overs to knock off the remaining 119 runs on fifth morning.

What was more embarrassing was England knocking off the runs in 76.4 overs, which isn’t even a full day’s play and at a run-rate of nearly five runs per over (4.93).

Root (142 not out), who has been in even more sublime form since relinquishing captaincy, scored his 28th century and was involved in an unbroken 269-run stand with Bairstow (114 not out), whose ton count reached a dozen after the completion of this game.

Bairstow, who is in the form of his life, topped up his first innings of 106 with an even more graceful century as Brendon McCullum’s philosophy of deflating teams on flat decks is currently working wonders.

A cursory look at a statistical nuggets reveals the impact Bairstow and Root have made in England’s last four victories.

Both have played significant role in three chases in the last four games.

This is India’s third straight Test match defeat in a ‘SENA’ country (SA, England, NZ, Australia) after back-to-back defeats against South Africa but this will hurt more as they had a sizeable first innings lead of 132 runs.

The defeat would also significantly dent India’s chances of finishing in top-two in the World Test Championship (WTC) table.

Bumrah in his first tryst as captain was very impressive despite the disappointing outcome but what would hurt India badly is the tactics employed by the team that had so many senior players.

A team that has set a target of 378 couldn’t have possibly started with a spread out field, logic of which would need some explaining from head coach Rahul Dravid.

Since he has taken over, India have lost three out of four overseas Tests and for a man, who relies heavily on method and process, that’s not a great piece of stat.

Bowling with a deep extra cover, deep mid-wicket, deep fine leg only gave a negative impression about the strategy deployed on the fourth evening.

The singles and doubles were easy pickings as none of the bowlers was able to settle down. It was imperative to keep one batter at one end under a tight leash.

As pressure released, the boundaries flowed from the blades of both the batters. It wasn’t a typical ‘Bazball’ approach which is going for leather but bleeding the opposition with thousand cuts, both practically and metaphorically.

The gaping holes in the field were a testimony of a hollow strategy.

Ravindra Jadeja (18.4-3-62-0), a classical left-arm spinner, bowled over the wicket throughout, negating any chance of trapping the batters in front of the wicket. Not for once did he come round the wicket to pin the batters.

The Englishmen hit 50 boundaries in all — 48 fours and two sixes and ran 158 runs in singles, doubles and triples. That’s the long and short of the story.

Virat Kohli’s presence in the field is imposing but perhaps time has come to ask if his aggressive on-field demeanour and rubbing the opposition in wrong way is proving to be counter-productive as it happened in this Test match.

He hurled harsh words at Bairstow without any provocation and the result was there for everyone to see.

Ian Bishop termed it akin to poking a bear while Virender Sehwag in his inimitable style tweeted that before Kohli’s sledges, Bairstow was “batting like Pujara” and post his unsavoury engagement, the Englishman turned into ‘Pant’.

There could also be a serious debate as to why Ravichandran Ashwin was ignored and Shardul Thakur was preferred for this game.

Against attacking batters, Ashwin and his experimental stuff could have worked but then hindsight is always a good teacher.

In the Indian batting line-up, it seems Shubman Gill is more suited for a middle-order position instead of opening the innings, which demands a tighter technique.

Both Hanuma Vihari and Shreyas Iyer may also find it difficult to stay relevant in this set up for overseas contest.

Iyer came across as ‘a cat on hot tin roof’ against short ball and despite being in the Indian set-up for some time. Batting coach Vikram Rathour hasn’t been able to provide much cure.

The ‘Fab Four’ (Joe Root, Kane Williamson, Steve Smith and Kohli) is in danger of losing one member as Kohli’s diminishing returns with the bat for the last three years continues to be a huge of cause of concern.

Root hitting the winning run with an audacious reverse sweep was symbolic than ever, rubbing it on Kohli’s wounds.