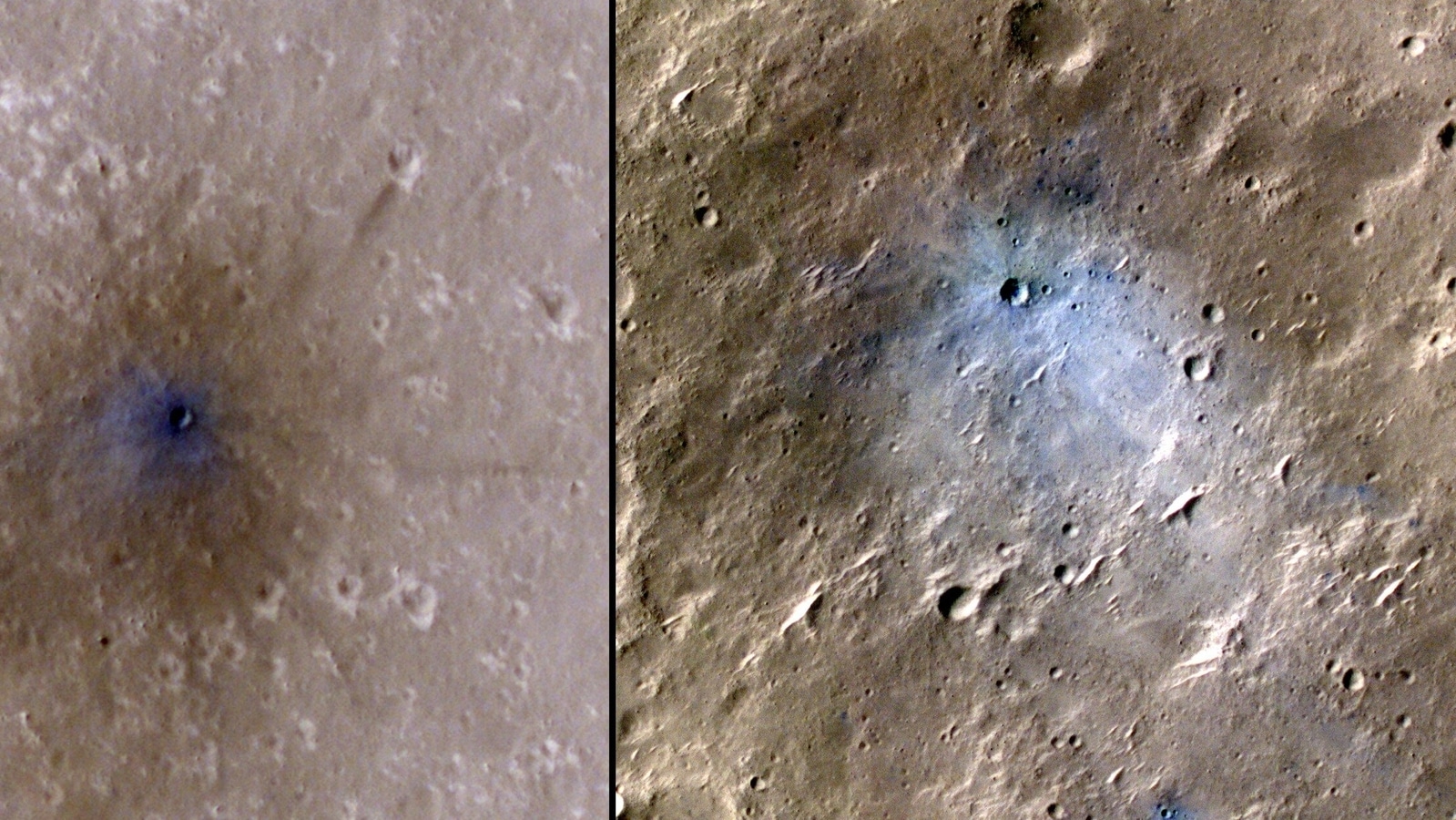 Marsquakes, meteroids and craters on the Red Planet – NASA has unveiled images that capture the impact of meteoroids on the neighbouring planet in its latest updates from the InSight Mission.

Craters can be seen on the surface of the Red Planet in the photographs. Revealing details on one of the images, the space agency says that a small marsquake was detected by the InSight lander’s seismometer. This is the first time that the impact was recorded in this manner of the meteroids hitting the planet. “The instrument recorded seismological data that showed the moment the meteoroid enters Mars’ atmosphere, its explosion into pieces in the atmosphere, and finally, the impact that created a series of at least three craters in the surface,” underlines the space agency in a statement.

After the seismic waves were detected, Mars Reconnaissance Orbiter – using its High Resolution Imaging Science Experiment (HiRISE) camera – flew over the approximate site where the impact was “felt” to look for darkened patches. “The ground is not actually blue; this enhanced-color image highlights certain hues in the scene to make details more visible to the human eye – in this case, dust and soil disturbed by the impact,” the statement further points out.

Not just that, the space agency has also shared details about sounds from the exact moment when one of the meteors hit the Martian surface. “What’s that? Oh, just the sound of new craters being made on Mars. Sound up for the latest from the @NASAInSight lander, whose seismometer picked up the signal of a meteoroid hitting the Martian atmosphere, breaking up, and hitting the ground,” reads one of the tweets along a video, which has, well, bits of the captured sound.

These vibrations have been picked from four separate impacts in the past two years by the Mars lander’s seismometer.

“After three years of InSight waiting to detect an impact, those craters looked beautiful,” said Ingrid Daubar of Brown University, a co-author of a research paper – linked to the observations – and a specialist in Mars impacts.

More than 1,300 marsquakes have detected by the InSight seismometer. “The instrument is so sensitive that it can detect seismic waves from thousands of miles away. But the Sept. 5, 2021, event marks the first time an impact was confirmed as the cause of such waves,” NASA says. Apart from the September 5, 2021 event, researchers confirmed three other impacts had been recorded on May 27, 2020, February 18, 2021, and August 31, 2021.

Why is this observation about impact significant?

The team of experts suspects that other impacts “may have been obscured by noise from wind or by seasonal changes in the atmosphere”. With the new details, however, scientists expect to find more hiding within InSight’s nearly four years of data. But the impacts will be critical to refining Mars’ timeline. “Impacts are the clocks of the solar system,” said the paper’s lead author, Raphael Garcia of Institut Supérieur de l’Aéronautique et de l’Espace in Toulouse, France. “We need to know the impact rate today to estimate the age of different surfaces.”

Scientists can approximate the age of a planet’s surface by counting its impact craters: The more they see, the older the surface, underlines the latest statement.