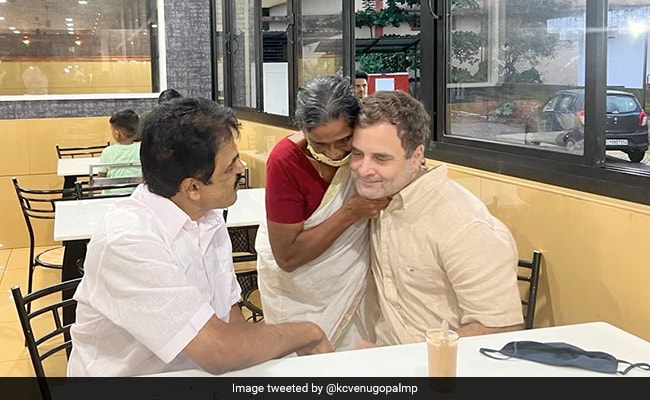 New Delhi: Rahul Gandhi was seen offering food from his plate and then warmly hugging an elderly woman during his visit to Kerala’s Wayanad. The Congress MP was sitting with senior party leader KC Venugopal at a cafe, when the heart-warming moment was captured on camera.

The senior Congress leader translates the same and then offers the woman food from their plate. Rahul Gandhi follows. The interaction ends with the unnamed woman, who is standing, lovingly touching Rahul Gandhi’s face and the leader hugging her.

“Unscripted pure love and adoration – this is what a true leader receives when he selflessly works and fights for his people and his country,” the Congress posted on Twitter with the accompanying video.

Unscripted pure love and adoration – this is what a true leader receives when he selflessly works and fights for his people and his country. pic.twitter.com/4cbU0Khxce

On another occasion and another day during this trip, the 52-year-old leader was seen shaking hands with an elderly woman. She touched his cheeks during the meeting, and someone in the video was heard saying she had been waiting since morning to see the Congress MP.

In another warm exchange, Rahul Gandhi was greeted by a young girl, who quickly climbed into his SUV. “What is your name, are you coming with me?” Mr Gandhi asked the child, as many who accompanied her took photos. The Congress MP then offered a chocolate and took a selfie with the girl before she left.

The Congress leader had been touring his Lok Sabha constituency.