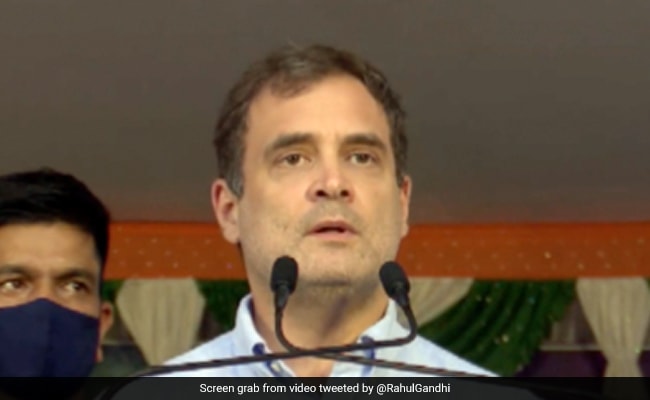 New Delhi: Former Congress president Rahul Gandhi Wednesday attacked the government over the issue of price after the rate of liquefied petroleum gas (LPG) was hiked by Rs 50 per cylinder, accusing the BJP of managing headlines but mismanaging economy.

His attack came on a day the cooking gas price witnessed a third increase in rates since May on firming international energy prices.

Non-subsidised LPG now costs Rs 1,053 per 14.2-kg cylinder in the national capital, up from Rs 1,003 previously, according to a price notification of state-owned fuel retailers.

“Headlines Managed. Economy Mismanaged,” Rahul Gandhi tweeted, with a photo and text to suggest the BJP’s stance on inflation and the depreciation of Indian currency changed after it came to power. In the text, he said the BJP used to propagate (prachar) in the past that the currency of a country goes down if it has a corrupt government. But now “Indian Rupee slips to Rs 79.36 hitting record low” which is an “attack” (prahar) on the common man, he said.

He also said that in 2014, inflation used to be the headline, now there is no discussion on price rise as LPG becomes costlier by Rs 50, to cost Rs 1053 per cylinder.

Rahul Gandhi had said earlier that BJP promised that two crore jobs will be created every year, but India has lost 1.3 crore jobs in June.

The former Congress chief has been attacking the BJP government on issues of price rise and unemployment.