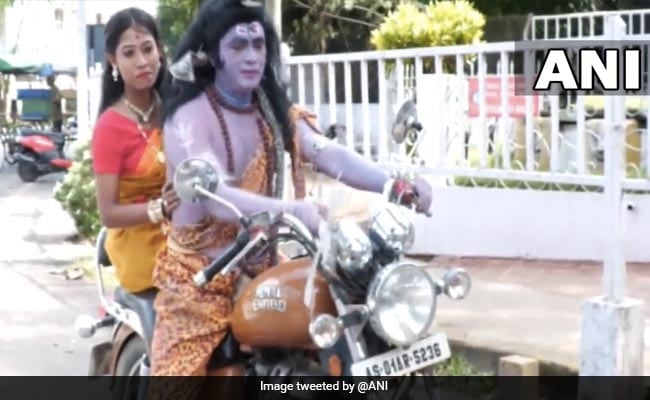 Guwahati: A man was arrested in Assam today after he was accused of hurting religious sentiments during a street play in which he is dressed as Lord Shiva.

Birinchi Bora dressed up as Lord Shiva yesterday while performing a skit with a female co-actor (who dressed up as Parvati) to protest against price rise under the Narendra Modi government. The videos of their act were widely shared on social media.

Their act was, however, criticised by Hindu groups like Vishwa Hindu Parishad and Bajrang Dal, who held protests against their act and later filed a complaint accusing the actor of hurting religious sentiments and misusing religion for political purposes.

In the street play, Birinchi Bora and his co-actor Parishimita, seen dressed as Shiva and Parvati, were riding a two-wheeler on a road. At the designated spot for the street play, the vehicle stops apparently because it ran out of fuel. What follows was an argument between Shiva and Parvati over the issue, where ‘Shiva’ starts to attack the Modi government over rising fuel prices and other issues.

He appealed to the public to come out to protest against the Narendra Modi government to get rid of rising prices.

So far, Nagaon police have not commented on Bora’s detention.