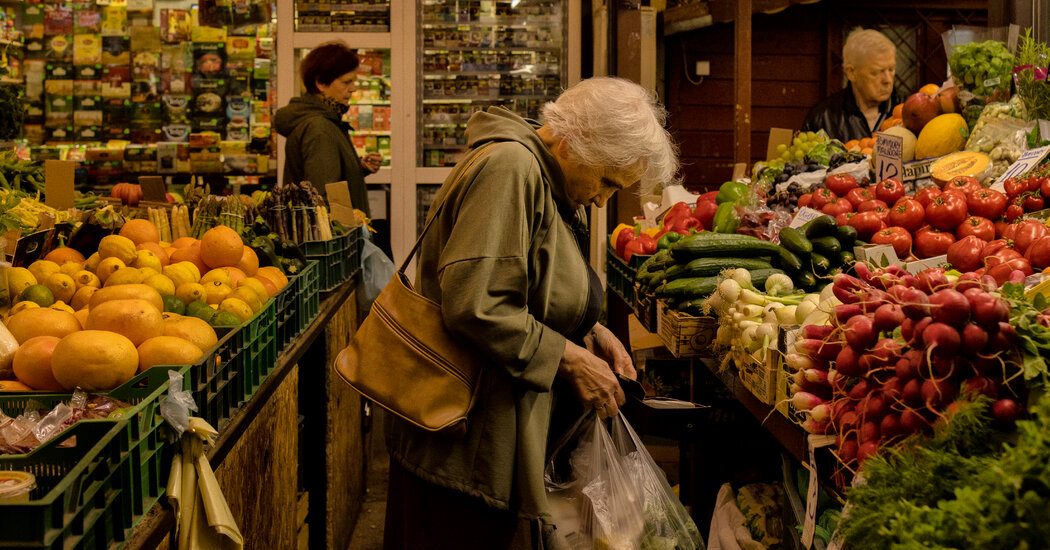 Inflation has dominated the news about America’s economy in recent months as prices for food, gas and other goods have increased faster than they have in four decades.

But inflation is a global phenomenon right now — and the U.S. has actually fared better than other countries in recent months. In June, consumer prices in the U.S. increased 9.1 percent over the previous year; they increased 9.6 percent across the E.U. in the same time period.

Much of the public discussion about inflation in the U.S. has focused on domestic problems, particularly President Biden’s policies. Critics argue that the American Rescue Plan, the pandemic relief bill that Biden signed into law 16 months ago, has supercharged consumer demand by sending $1.9 trillion to Americans, state governments and other programs. As higher demand has chased limited supplies of goods, prices have soared.

The law has certainly played a role in increased inflation, economists say. But the global trends suggest that focusing solely on the U.S.’s role misses a big part of the story — how external forces have driven up prices, too.

In today’s newsletter, I want to look at the main causes of inflation and why they might be difficult to fix.

The big factors that drove up inflation in the U.S. also affected the rest of the world: the disruption of supply chains by both the pandemic and Russia’s invasion of Ukraine, and soaring consumer demand for goods.

But increasing inflation has played out differently in different countries, said Jason Furman, an economist at Harvard University. The U.S.’s earlier, bigger price spike had different causes than Europe’s more recent increase. (Countries differ in how they calculate price changes, but economists still find comparisons of the available data useful.)

In the U.S., demand has played a bigger role in inflation than it has elsewhere. That is likely a result of not just the American Rescue Plan but also economic relief measures enacted by Donald Trump. Altogether, the U.S. spent more to prevent economic catastrophe during the pandemic than most of the world did. That led to a stronger recovery, but also to greater inflation.

In Europe, supply has played a bigger role. The five-month-old war in Ukraine was a more direct shock to Europe than it was to the rest of the world, because it pushed the continent to try to end its reliance on Russian oil and gas. That prompted Europe’s recent jump in inflation.

“The U.S. is trying to cool down an overheating economy,” my colleague Eshe Nelson, who covers economics from London, told me. “That is just not the situation in Europe.”

Some of the causes of inflation are in policymakers’ control. Governments can reduce their own spending to reduce demand. Central banks can raise interest rates to increase the cost of borrowing money and, as a result, push down demand — as they have started to do in the U.S. and Europe. In the longer term, investments into, say, clean energy and housing can limit the impact of future supply crunches.

But other causes are outside policymakers’ control. The European Central Bank, which sets policy for 19 of 27 E.U. countries, has acknowledged it can only do so much to fight inflation caused by Russia’s invasion of Ukraine. “The war is obviously something no central bank can do anything about,” Eshe said.

The same is largely true for the trajectory of the pandemic, which now mainly depends on the evolution of new variants.

All of that puts policymakers in a bind: They can address part of the inflation problem, but not all of it. That will limit how much policy can bring down price increases in the coming months.

Jack Powers spent two decades in solitary confinement. A documentary by Pete Quandt follows him on his first day of freedom.

Lives Lived: Paul Sorvino played calm but dangerous men, most notably in “Goodfellas.” He was also a trained tenor, singing on Broadway and in the New York City Opera. Sorvino died at 83.

If you’re looking for an obscure film, Will Malitek can help. He is the last movie rental clerk in New York.

His shop, Film Noir Cinema, started in 2005 as a walk-in closet of DVDs and has grown into a spacious den of films and memorabilia attached to a 54-seat cinema. Screenings at Film Noir are shrouded in mystery, sometimes offering only a brief description of the night’s theme.

Malitek’s taste guides the selections, and don’t expect Hollywood blockbusters. “I am trying to keep it as old school as possible,” he told The Times, “so when people are here they feel like they’re in a different world.”