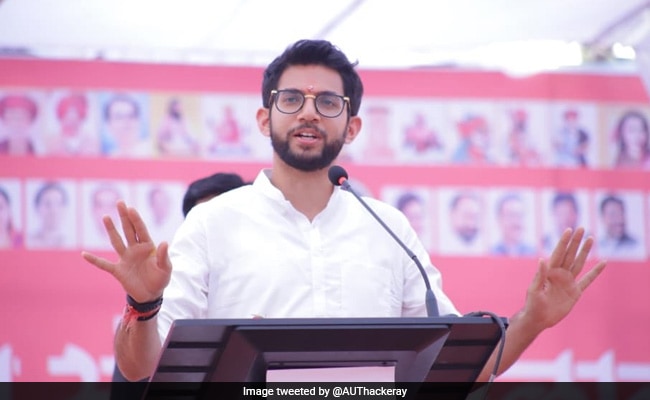 Mumbai: Attacking rebel MLAs of the party who are staying at a hotel in Guwahati, Shiv Sena leader Aaditya Thackeray accused them of “betraying” the party and said, “dirt has gone out of Shiv Sena”.

Mr Thackeray, who was addressing Shivsainiks in Mumbai amid the political crisis faced by the MVA government in Maharashtra, said the party rebels were “enjoying” in Guwahati when Assam was dealing with floods in parts of the state.

He said the leader of the rebel group Eknath Shinde was offered the post of Chief Minister in May but “he did drama”.

“Many people told us that Congress & NCP will betray us but our people betrayed us. Many MLAs who were watchmen, rickshaw drivers, and paan shopkeepers – we made them Ministers. On 20th May, Uddhav Thackeray offered him (Eknath Shinde) the CM post and he did drama,” Aaditya Thackeray said.

He said there was anger among party workers over the action of party rebels.

“I can understand your zeal and strength, can even notice your anger. I’ve been visiting and interacting with Shivsainiks and I can see there is a lot of anger among them. But there is one positive thing the dirt has gone out of Shiv Sena,” he said.

Aaditya Thackeray claimed that the food bill of rebel MLAs was to the tune of Rs 9 lakh per day and alleged they were taking private choppers.

Referring to Income Tax searches earlier this year on party corporator Yashwant Jadhav, who is husband of Yamini Jadhav, a rebel MLA, Aaditya Thackeray said they had protested the action of the Income Tax Department but her remarks had brought tears to his eyes.

“When there was a raid on Yamini Jadhav (rebel MLA) & Yashwant, we came out on streets. Y’day Yamini Jadhav said it was not needed. Many people had suggested to not give them chance but we gave them opportunity. What she said yesterday brought tears to my eyes,” he said.

The Shiv Sena camp led by Chief Minister Uddhav Thackeray and the rebel group have been seeking to outmanoeuvre each other. While the Thackeray group removed Mr Shinde as leader of the legislative party and appointed a new chief whip, supporters of Mr Shinde wrote to the state Governor that he continues to be the leader of the Shiv Sena legislature group. They also appointed a chief whip.

The battle between the groups has now reached the Supreme Court which on Monday granted interim relief to Mr Shinde and other MLAs to file their reply to disqualification notices issued to them by the Deputy Speaker of Maharashtra Assembly by July 12, 5.30 pm.

Earlier, the Deputy Speaker had granted them time to file a reply by Monday, 5.30 pm.

The Supreme Court was hearing the petitions filed by the Shinde group challenging the disqualification notices issued by the Deputy Speaker to 16 rebel MLAs as well as the appointment of Ajay Choudhary as Shiv Sena Legislature Party leader.

The bench also issued notices to the Deputy Speaker, Secretary of Maharashtra State Legislative Assembly, the Centre, Ajay Chaudhary, and Sunil Prabhu and asked them to file a reply within five days.

On the request of providing security to 39 MLAs alleging threats to them, the Supreme Court recorded the statement of the standing counsel of the Maharashtra government, Rahul Chitnis, that adequate steps have already been taken and the state government will further ensure that no harm is caused to the life, liberty, property of the MLAs.

During the hearing, senior advocate Neeraj Kishan Kaul appearing for Eknath Shinde and others told the Supreme Court that the Deputy Speaker cannot proceed with the disqualification proceedings when the resolution seeking his removal is pending.