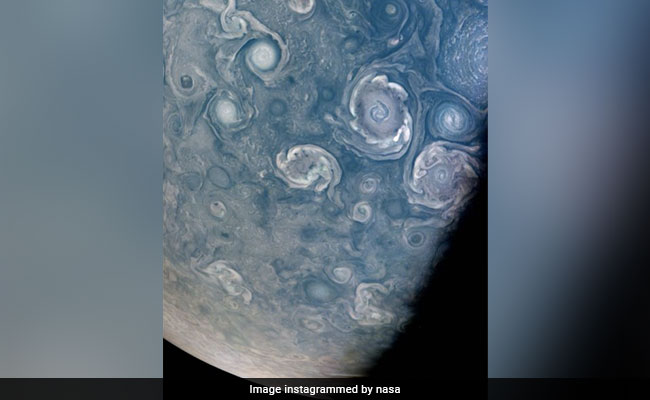 The picture has garnered over one million likes on Instagram.

American space agency NASA on Sunday shared a striking image of our solar system’s largest planet Jupiter. Taking to Instagram, the National Aeronautics and Space Administration informed that the Juno spacecraft took the picture when it completed its 43rd flyby of Jupiter over the planet’s North Pole in July 2022.

Take a look below:

The picture shows storms on Jupiter in shades of blue and white. They appear in large swirling patterns with wavy patterns emerging between the circles.

Shared just a few hours ago, the picture has already garnered over one million likes. Internet users flooded the comment section with lovestruck and fire emojis. While some users called the picture “stunning,” others called it ” beautiful”.

One user compared the Jupiter image to the famous ‘Starry Night’ painting by Vincent van Gogh and asked, “The starry night… is that you”. Another said, “This is literally so stunning.”

A third commented, “Jupiter was painted by Van Gogh,”  while a fourth added, “Absolutely amazing!”

In the caption, NASA stated that citizen scientist, Brian Swift, created the enhanced colour and contrast view of vortices using raw JunoCam image data. At the time the raw picture was taken, the Juno spacecraft was around 25,100 kilometres above Jupiter’s cloud tops, the space agency informed.

It also added that the powerful storms on Jupiter can be over 50 kilometres in height and hundreds of miles across. “With no solid surface to slow them down, the storms can last for years and have winds up to 335 miles per hour (539 kph),” the caption of the post read.