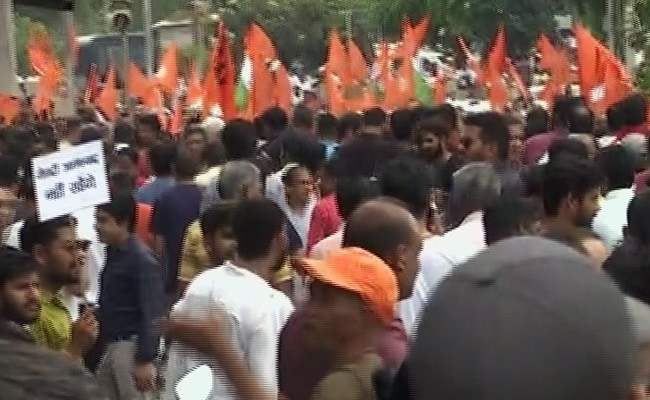 Udaipur, Rajasthan: Amid outrage over tailor Kanhaiya Lal’s murder on camera by two men with terror links, several Hindu organisations took out a huge procession in Udaipur this morning.

About 1,000 protesters held saffron flags and chanted slogans demanding justice as the procession marched through Udaipur under heavy security. All shops are shut in the city that has been under curfew since violent protests erupted on Tuesday over the gruesome killing.

Security has also been increased for the visit of Rajasthan Chief Minister Ashok Gehlot, who will meet with the family of Kanhaiya Lal.

Kanhaiya Lal, 48, was murdered on Tuesday by two men who filmed the killing and boasted about it, also threatening Prime Minister Narendra Modi.

Riaz Akhtari and Ghouse Mohammad, who are seen on camera attacking Kanhaiya Lal with a cleaver, were arrested and five more have been detained.

The Union Home Ministry has handed over the investigation to the country’s top anti-terror body, the National Investigation Agency (NIA).

The killers had links with Pakistan-based group Dawat-e-Islami and one of them also went to Karachi in 2014, say investigators.

The tailor’s murder was a planned act of terror and more people were involved, Rajasthan police chief ML Lather said.

“The main accused were in touch with organisation Dawat-e-Islami. One of them also went to Karachi in Pakistan in 2014 to meet the organisation. We are considering it an act of terror,” he said.

Mr Lather said an Assistant Sub-Inspector has been suspended for not taking proper action to prevent the incident.

Kanhaiya Lal had complained to the police on June 15 about death threats and harassment by his neighbours over his post on social media supporting BJP leader Nupur Sharma, whose provocative comments on Prophet Muhammad had triggered anger in Gulf nations and massive protests in India.

But Kanhaiya Lal’s wife Jashoda told NDTV he had avoided going to his shop for a week. On Tuesday, he had gone for the first time in days.

A large crowd also turned up for Kanhaiya Lal’s cremation on Wednesday, with many raising slogans.

Principal Says Girls Could Have Asked For Permission