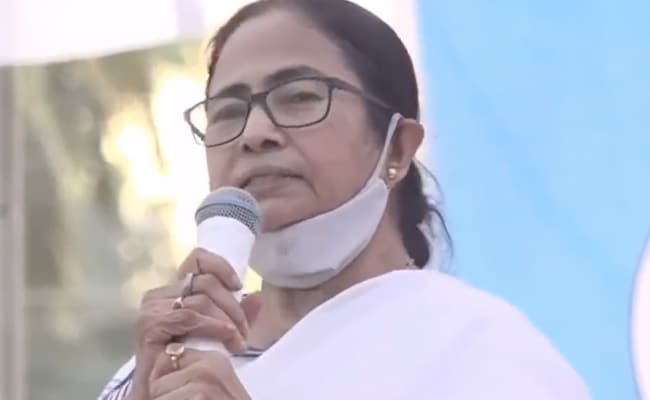 Kolkata: West Bengal Chief Minister Mamata Banerjee on Monday described the new Maharashtra government led by Eknath Shinde as “unethical and undemocratic” and claimed it will fall soon as it has “failed to win people’s hearts”.

Taking a dig at BJP, she alleged it has misused the power of money and muscle, and central agencies to topple an elected government in Maharashtra.

The Trinamool Congress supremo alleged that the Shiv Sena MLAs were flown to Assam and “supplied not only money but also many other things”.

She, however, did not elaborate on her accusations.

“I believe this (Maharashtra) government will not continue as the BJP has misused its power. It’s an unethical and undemocratic government. They might have formed the government, but they have not won the hearts of the people,” Ms Banerjee said while speaking at a conclave organised by a television channel.

The speech was broadcast live on the CM’s Facebook page.

“I have seen so many governments, but never seen such a vindictive one (the BJP-ruled Centre). When there was an elected government (in Maharashtra), why did the BJP topple it with power of money, muscle and using ED, CBI?” she said.

“Where did you get the money to provide such luxurious life to the Maharashtra MLAs in Assam? How many things were supplied to them, not only money…just go and find out. I know…but sometimes silence is golden…I know what they can do…I cannot give the details,” she said.

Ms Banerjee also said in the 2024 Lok Sabha elections, common people of the country will “bulldoze the BJP”.

On Union Home Minister Amit Shah’s assertion that BJP will end “dynastic rule” in Telangana and West Bengal, Ms Banerjee, in an apparent reference to Shah’s son Jay Shah becoming the BCCI secretary, said, “When someone becomes BCCI’s top boss, there is no talk of dynastic politics. It’s only mentioned while referring to people fighting on the grassroots level. In all the sports, you have taken over all the top posts.” While referring to her nephew and party’s national general secretary Abhishek Banerjee, she said there is no harm in bringing the next generation into politics as they will run the country in the future.

“What is the harm? People have elected him (Abhishek) twice. Don’t you want the young generation to take up the reigns of the country? In the Banerjee family, everybody is in politics but nobody holds any position. There are so many families in this country (who are in politics),” she said.

Ms Banerjee rubbished allegations of post-poll violence in West Bengal, and claimed that no such incident had happened in the state after assembly elections last year.

“Nothing had happened. Twenty-one people had died before the assembly elections when President’s Rule was imposed in the state under the EC. Four people were shot dead by the BSF. And 16 of the victims were TMC supporters.”

“If there is any report of poll violence in West Bengal, Centre sends all human rights commissions but when there is violence in BJP-ruled Tripura before and after polls, no questions are raised,” she said.

She alleged that the Centre only encourages “BJP-minded people” to invest in the country.

“The Modi government only encourages investment from BJP-minded people, with whom they keep money and from where they get money. That is the basic difference between us and them — our interest is to build industry wherever there is opportunity. More than 1 lakh industrialists have left the country. It’s a shame,” Ms Banerjee said.

On Mamata Banerjee’s government seeking investment from industrialists such as Adani and Ambani, she said, “Politics and industry are different. If we want to grow, we have to divide the fruit for all. Adani Group is building a data bank and Mukesh Ambani’s group a cable landing station here. There is opportunity from every corner.”