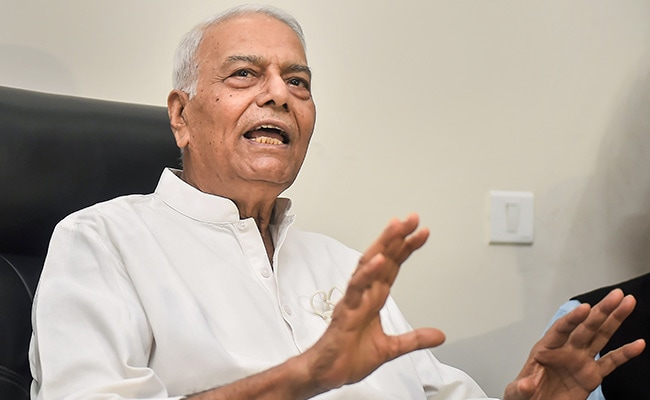 Thiruvananthapuram: Yashwant Sinha, the candidate of joint Opposition nominee in the presidential election, on Wednesday said a “thinking and speaking” person should be the resident of Rashtrapati Bhavan and not a rubber stamp.

Criticising the presentation of nomination papers of NDA candidate Droupadi Murmu by Prime Minister Narendra Modi, he said he presented his papers by himself.

“India needs a Rashtrapati who serves as the impartial custodian of the Constitution and not one who acts as a rubber stamp for the government. The President must have a mind of his/her own and use it conscientiously, without fear or favour, whenever the executive or other institutions of the Republic deviate from the Constitutional principles. It is my solemn assurance to the people of India that I shall serve as a President worthy of the lofty vision of the makers of the Constitution,” Mr Sinha said while speaking to reporters here.

The former union minister also criticised the Agnipath, the new defence recruitment scheme, brought out by the Union government, and said no necessary consultations were made before going ahead with its introduction.

There are Parliament Standing Committees on defence which were also not consulted, he alleged.

It was all done in a hurry and the result was seen on ground, he said, mentioning about the country-wide agitations against the scheme.

This is not the way to solve the issue of unemployment, he added.

He also condemned the “barbaric” killing of a tailor in Udaipur city of Rajasthan, saying that such instances of violence have no place in a democracy and the perpetrators should be punished as strictly as the law of the land permits.

He also condemned the arrest of Mohammed Zubair, a journalist, who co-founded Alt News, saying that the action was taken on a baseless accusation of hurting the religious sentiments of a community.

“Ironically, the arrest happened on a day when India, represented by the Prime Minister, was waxing eloquent in the meeting of G7 in Germany about the need to protect free speech both online and offline,” Mr Sinha said.

He Entered Mamata Banerjees Home Thinking It Was This