Imphal: Romen Phukan was sleeping after watching a movie when the world around him collapsed. A towering hill had just crashed down on the railway construction site where the 35-year-old from Assam was working as a labourer.

The ordeal was just beginning. A week later, at least 48 people are reported dead in one of the country’s worst-ever landslides; among them were 29 soldiers of the Territorial Army posted to guard the construction site. At least 14 of the army jawans dead are Gorkha soldiers – this is the largest casualty of the Gorkha soldiers of Indian Army in peace-time.

Day and night, the rescue operations continue in the hope of locating 13 people who remain missing. The army is helping out with the search operations, providing troops and helicopters. But rain and smaller landslides continue, making the operation that much tougher. 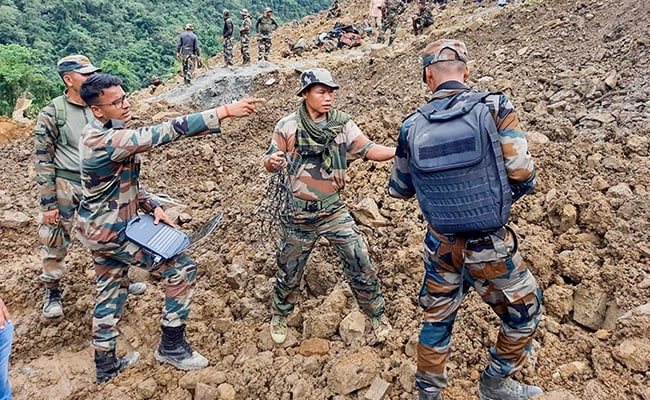 Rescue operations for those buried by the Manipur landslide.

The landslide began at midnight, when workers were fast asleep in tents at the construction site at Tupul in a district that is a two-hour drive from Imphal, the state capital. The construction site is at the foot of a hill, around which two rivers flow. Just 30 kilometres away stands the location where a railway bridge, the highest of its sort in the world, is meant to be built.

Over the last month, the North East has seen its most intense monsoon ever. Neighbouring Assam has been forced to relocate thousands of people as one village after another disappeared underwater.

The railway line being constructed in this area is of huge importance to Manipur, a mountainous state dependent on road and air connectivity. This stretch is essential to Prime Minister Narendra Modi’s plan for linking all eight North Eastern states by rail. The connectivity of the region with an international railway network, with a budget of Rs 12,000 crore, is expected to build trade and commerce for the North East, which has seen little industrial development or manufacturing.

Environmental clearances for the construction of the railway line, and the infrastructure necessary for it, like stations, were issued a decade ago. 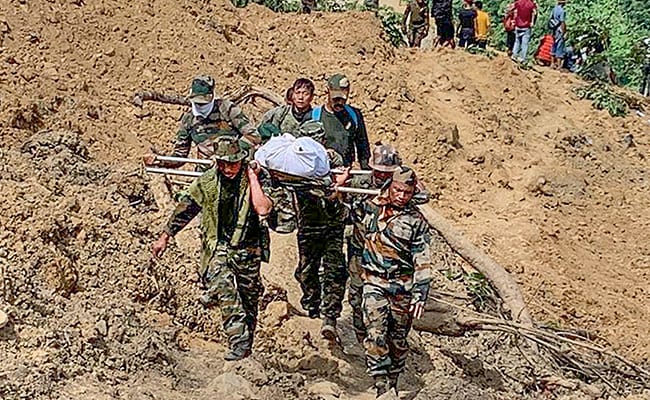 Rescuers have recovered several bodies from the landslide site.

“All the tunnels and bridges in this project are very stable, and the landslides have not affected any tunnel or bridges or any mega structure, it is only the yard station that got damaged,” Sabyasachi De, a senior railways official, told NDTV.

But environmentalists assessing the damage don’t concur. “When a railway line or road is constructed in such topography, it involves a lot of vegetation clearing, slope-cutting and after that, and soil filling, but we are observing that these activities are leaving the soil very loose and vulnerable to erosions” said Raj Bharat P, a geo analyst who is based in Tamil Nadu. He studied four satellite images that map the region before and after the railway construction began.

An image from 2009 shows lush, green hills in the district where the landslides took place. 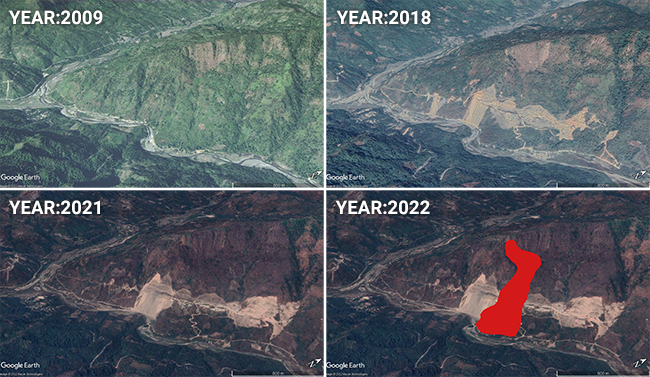 Satellite images of the spot where the Manipur landslide took place. Click here for high-resolution image.

A 2018 image shows cutting into the slope and forests being cleared. This is when construction began.
The construction expands with the forest cover significantly reduce in a 2021 image.

The fourth highlights in red the parts of the hill that collapsed.

Railways officials claim their engineers have addressed any vulnerabilities to ensure 47 tunnels and 156 bridges in the Manipur railway project are safe.

Experts point out that while it did rain torrentially in Manipur, there was nearly 25 per cent less rain than usual in June in the state. So, the heavy showers alone cannot have triggered the fatal landslide.