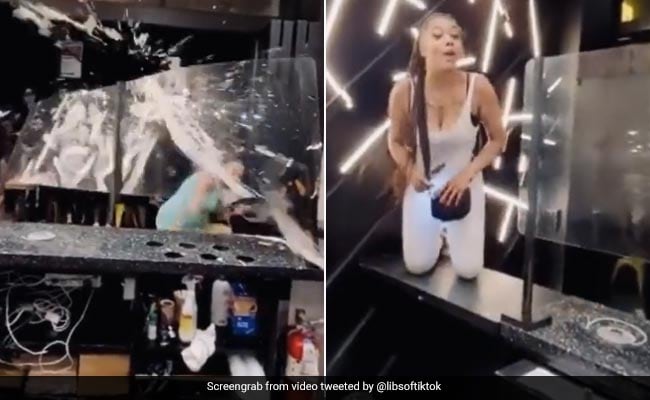 The three women have been arrested and charged with robbery and criminal mischief.

A video showing three customers trashing a New York City restaurant and attacking workers in a dispute over a $1.75 fee for extra sauce has gone viral on the internet.

The clip, initially shared on TikTok, shows three women throwing a metal stool, glass bottles and anything in arm’s reach at the restaurant employees. It also shows two of the women climbing over the counter and launching bottles of sauce from a close range. At one point, one of the women even dances on the counter, while the other two continue to destroy the restaurant.

According to the Independent, the incident took place on July 4 at Bel Fries in Manhattan’s Lower East Side. The three women have been arrested and charged with robbery and criminal mischief. Chef Rafael Nunez of the restaurant said that the three customers wanted extra sauce for the fries, however, when the employee explained that it costs $1.75, they got upset. “And that’s where it all started,” Mr Nunez added.

The three women have been identified as 27-year-old Pearl Ozoria, 25-year-old Chitara Plasencia and 23-year-old Tatiyanna Johnson. As per reports, the three customers destroyed computers, a cash register and other items inside the restaurant. One of the workers was also reportedly injured and was taken to the hospital.

According to FoxNews, Ms Ozoria even allegedly punched a police officer in the face while being arrested. She is now facing an additional charge of assault on a police officer, resisting arrest, obstructing governmental administration and disorderly conduct. The other two women were charged with criminal possession of a weapon as well.

Speaking to NBC4, the restaurant’s co-owner said that his six employees are so traumatised that they do not want to return to work. “They’re devastated. They’re afraid. One of them still doesn’t want to leave her home. She has a son. She fears for her life,” the co-owner stated.

Ms Ozoria, Ms Plasencia and Ms Johnson are now slated to appear before a judge on Friday, 15 July.

If Boris Johnson Is Ousted, Who Can Replace Him?