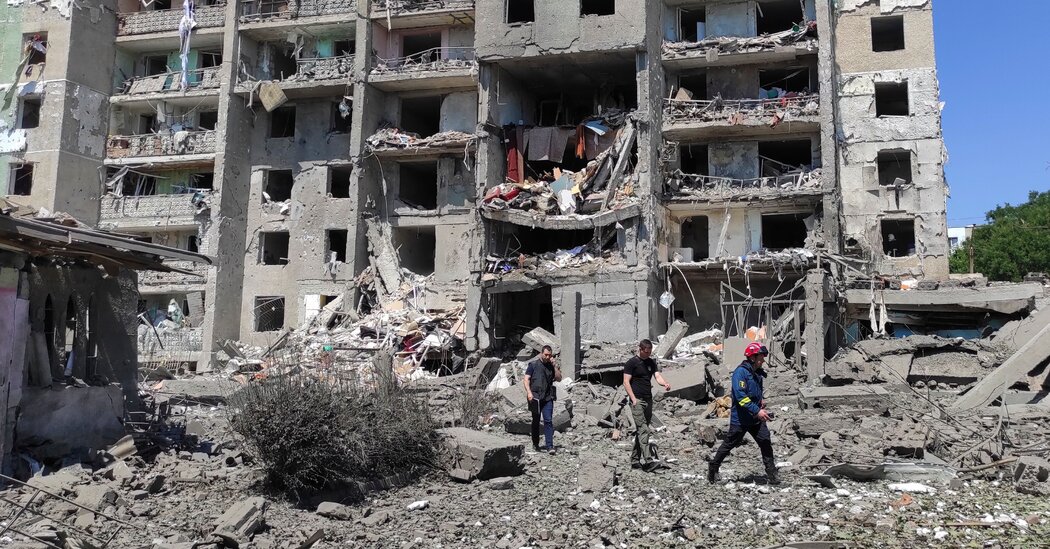 Overnight missile strikes on a residential tower and a recreational center in a coastal town southwest of the Black Sea port city of Odesa early Friday killed at least 19 and injured dozens of others, Ukrainian officials said.

One of the missiles hit a nine-story residential tower in Bilhorod-Dnistrovskyi, about 50 miles southwest of Odesa, killing 16 and injuring at least 37, according to Ukraine’s state emergency service. Another hit a recreational center, where three died and one was injured, officials said.

Rescuers completed the search for bodies at the tower, which was home to more than 100 people and which was destroyed on one side, according to the regional military administration. They were still going through the rubble of the recreational center, officials said. The missiles struck around 1 a.m.

The Kremlin’s spokesman, Dmitri S. Peskov, again denied on Friday that Russia was targeting any civilian infrastructure. “I would like to again remind you of the words of the president of the Russian Federation and commander in chief that the Armed Forces of the Russian Federation are not working against civilian targets in the course of the special military operation,” Mr. Peskov said in his daily conference call with reporters.

Russia’s targets, he said, included ammunition and arms depots, plants that manufacture and repair military equipment, and places where “foreign mercenaries” and “nationalist elements” are based and trained.

The details of the missile attacks could not immediately be verified.

The attacks came as Russian troops withdrew from Snake Island in the Black Sea, about 20 miles off Ukraine’s southern coast, after repeated assaults by Ukrainian forces. The withdrawal was expected to undermine Russia’s control of vital grain shipping lanes from Odesa.

Odesa has long been coveted by President Vladimir V. Putin of Russia, whose forces have continued to display willingness to target civilians during the war. Previous Russian targets have included a theater, a maternity hospital and people waiting in line for bread.

On Monday, a Russian missile attack struck a shopping mall in the industrial city of Kremenchuk in central Ukraine, killing at least 18 people. Group of 7 leaders meeting in Germany called the mall attack a “war crime” in a statement.

In the war’s early weeks, Odesa was largely spared the high-casualty attacks on civilians suffered by other Ukrainian cities. Efforts by Russian forces to march westward along the coastline and capture the city were hindered by Ukrainian resistance and logistical issues.