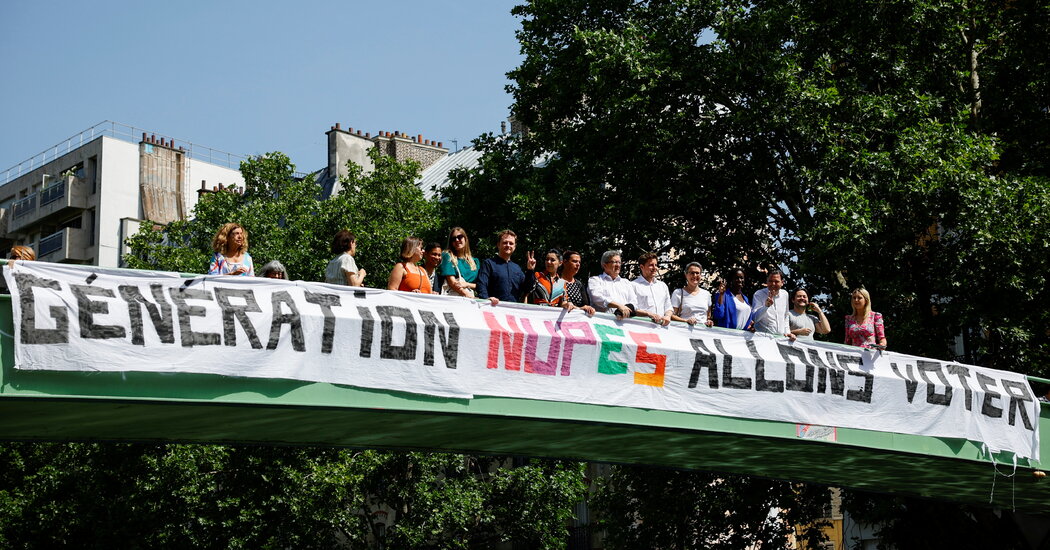 PALAISEAU, France — Five years ago, Amélie de Montchalin, a politician known more for her quiet technocratic skills than her oratory, easily won election to Parliament from this southern suburb of Paris, and later became one of President Emmanuel Macron’s ministers.

But at a small rally last week, at risk of losing her seat to a left-wing opponent in this year’s parliamentary elections, she launched into an uncharacteristically fiery tirade, accusing the left of promoting “a vision of disorder” that would lead France to “submission” to Russia.

If the left won, Ms. de Montchalin told the crowd gathered in a sun-drenched square, “in a few weeks or a few months, there will be bankruptcies and unemployed people.”

Her outburst reflected the bruising rhetorical battle that Mr. Macron’s centrist forces and a coalition of left-wing candidates are waging ahead of the second round of voting in the parliamentary elections on Sunday. The stakes are high for Mr. Macron given that a defeat could hamper his majority in the National Assembly, France’s more powerful house of Parliament, and hinder his ambitious agenda.

Mr. Macron’s supporters describe a potential victory by the coalition and its leader, the hard-left politician Jean-Luc Mélenchon, as a catastrophe that would ruin France. The left says Mr. Macron and his allies are panicking because they are losing their grip on power, and they accuse the president of staging photo ops in Kyiv, the Ukrainian capital, as he seeks to mediate in the Ukraine war instead of caring for French voters.

Both sides are desperately chasing the roughly 52.5 percent of the French electorate who did not vote last Sunday, the lowest level in the first round of a legislative election since 1958.

Polls and projections suggest it could be difficult for Mr. Macron’s alliance of centrist parties, known as Ensemble, to retain the absolute majority that it enjoyed during his previous term and that allowed him to push legislation through relatively unimpeded.

Instead, the president could be left with a relative majority — more seats than any other political force, but not more than half of the 577 seats in the National Assembly — forcing him to reach across the aisle for certain bills.

“Even if he gets a majority, it is likely that he will have to negotiate more,” said Olivier Rozenberg, an associate professor at Sciences Po in Paris. After five years of Mr. Macron’s top-down governing style, which left many lawmakers feeling sidelined, “the logic of governing will probably be a little less vertical,” Mr. Rozenberg said.

Weeks ago, Mr. Macron appeared likely to secure an absolute majority after convincingly defeating Marine Le Pen, the far-right leader, in the presidential race. Over the past 20 years, voters have usually given their newly elected president a strong parliamentary backing.

Then, France’s fractious leftist parties unexpectedly agreed to set aside major differences on foreign and economic policies, at least temporarily, and forge an alliance for the parliamentary election called NUPES, for Nouvelle Union Populaire Écologique et Sociale, which includes Mr. Mélenchon’s France Unbowed Party, and the Socialist, Green and Communist parties. In the first round last Sunday, they finished neck and neck with Mr. Macron’s alliance, with roughly 25 percent of the vote.

Pointing to the leftist alliance’s proposals, which include overhauling France’s Constitution and raising the monthly minimum wage to $1,580, Mr. Macron’s top lieutenants have compared Mr. Mélenchon with Hugo Chávez, the populist former Venezuelan leader. They have warned that a leftist victory would return France to “Soviet regulation” and bring a “fiscal guillotine at all levels.” They have also castigated Mr. Mélenchon as being too soft on Russia.

Jérôme Guedj, a Socialist who is running for the leftist coalition in the Essonne department against Ms. de Montchalin, lamented what he called “demonization, caricature and amalgam” that reflected Mr. Macron’s and his party’s “panic” over possible defeat.

“It really reminds me of 1981,” Mr. Guedj said, referring to the year when François Mitterrand, the Socialist leader, won the presidency with support from French Communists. “People were saying, ‘There will be Russian tanks on the Place de la Concorde.’”

The left has lobbed accusations of its own. Mr. Mélenchon’s supporters say the government is secretly planning to increase the value-added tax in order to reduce the country’s deficit, an assertion that Mr. Macron’s alliance has called a falsehood.

The speed with which Mr. Macron went from courting the left in the presidential election to battling it for the parliamentary vote is partly a result of France’s two-round electoral system. But it is also a testament to Mr. Macron’s shifting political nature, and to the fact that his party has gradually occupied an enlarged center with radical opponents on both sides, Mr. Rozenberg said.

This shapeshifting has not been without confusion. The president’s alliance initially struggled to give clear voting guidance to supporters in districts where Ms. Le Pen’s party was facing off against leftist candidates in runoffs, at times describing both forces as equally threatening. Party leaders eventually stressed that “not one vote” should go to the far right.

But some of Mr. Macron’s supporters appear divided on the issue.

Michèle Grossi, 74, a retiree from a constituency near Paris where the far right and the left will face off on Sunday, said she would vote for Ms. Le Pen’s candidate in the absence of a Macron candidate because she was “very afraid of Mélenchon.” Another supporter of Mr. Macron, Christophe Karmann, said that presented with the same scenario, he would back the left because it was a “republican force.”

Ms. Grossi also echoed concerns among some of the president’s supporters that he had been disengaged from the campaign, saying it was “unfortunate that Macron has not spoken more.”

Mr. Macron tried to dispel that notion last week, issuing dire warnings about what was at stake in this election. In a solemn address on Tuesday on the tarmac of Orly airport, south of Paris, he said that “in these troubled times,” the vote was “more crucial than ever.” He urged voters to give him a “solid majority” for the “superior interest of the nation.”

“Nothing would be worse than to add a French disorder to the global disorder,” said Mr. Macron, who was about to embark on a trip to Eastern Europe, partly to visit French troops dispatched in response to the Russian invasion of Ukraine.

But Mr. Macron’s comments, made as the presidential aircraft’s engines thrummed in the background, did little to quell accusations from his opponents that he had avoided open confrontation.

“His ship is sinking and Macron is taking a plane,” Mr. Mélenchon said mockingly at a rally in Toulouse. In an interview with Le Parisien, Mr. Mélenchon said the French president was disconnected from ordinary citizens’ concerns over rising food and energy costs.

“He doesn’t understand French society,” he said. “He doesn’t realize how people are being suffocated by prices.”

In the Essonne department, Ms. de Montchalin, who is currently the minister in charge of France’s green transition, trailed Mr. Guedj by seven percentage points after the first round. She is one of 15 ministers who are running for a seat in Parliament and who have been warned by Mr. Macron that losing would mean leaving his cabinet.

To gin up support during the rally last week, Ms. de Montchalin invited a notable guest: Bruno Le Maire, France’s longtime finance minister. He told the crowd that the economy had improved — unemployment has fallen to 7.3 percent, the lowest level in a decade — and that unlike Mr. Mélenchon, Mr. Macron was not promising “a bright future on credit.”

But Ms. de Montchalin’s campaign staff acknowledged it would be a tough election.

Mr. Karmann said he had bet with friends that should Mr. Macron’s party fail to muster a solid working majority, the president would dissolve the National Assembly and call new elections. France in the next five years, he said, “will be hard to govern.”