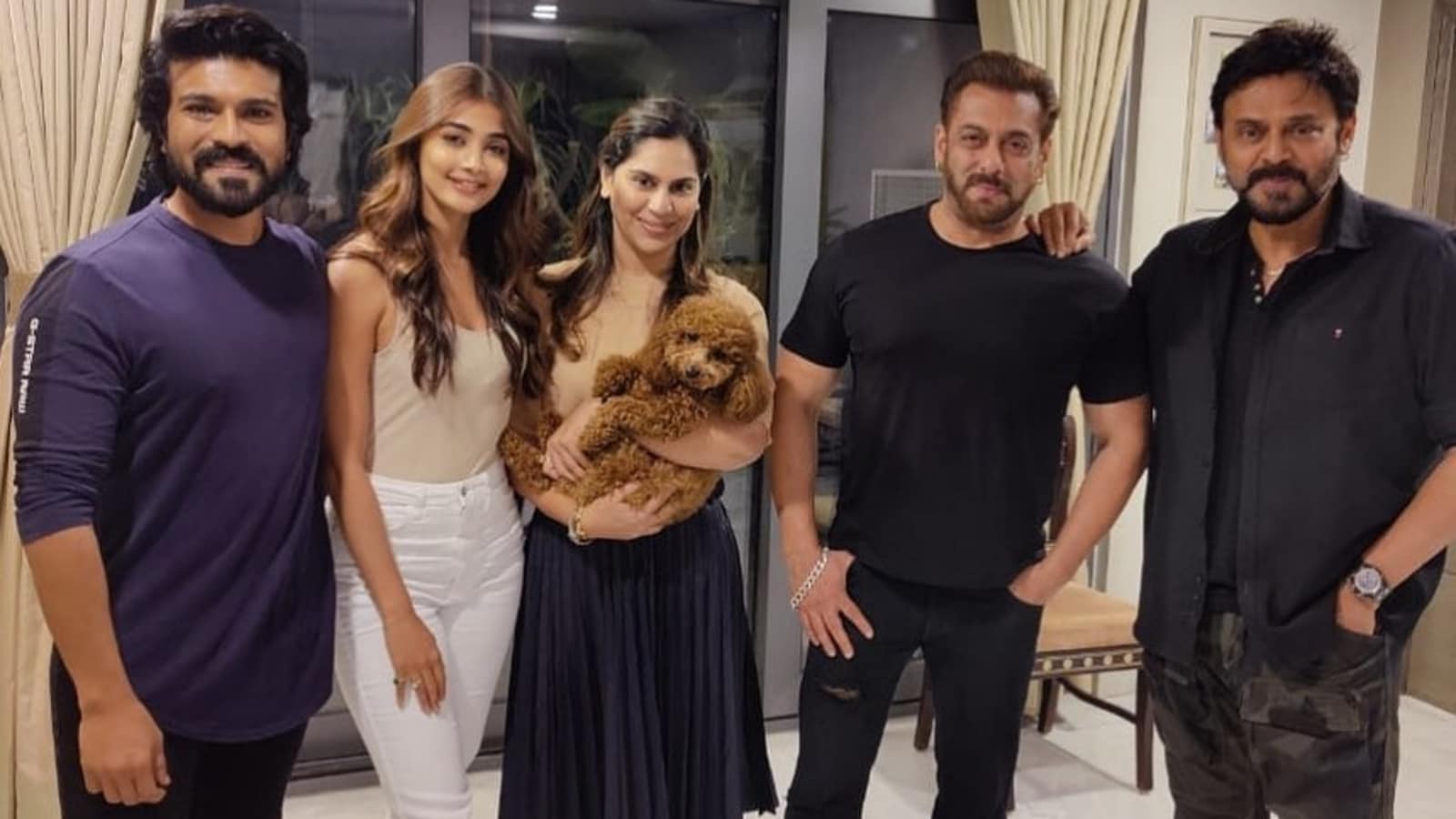 Ram Charan and his wife Upasana Kamineni Konidela recently hosted Salman Khan, Venkatesh Daggubati and Pooja Hegde at their home. On the Instagram account of Ram’s pet Rhyme, a photo was posted as they all posed for the camera. In the picture, Upasana was seen holding Rhyme in her arms.

In the new photo, Salman wore a black T-shirt, matching pants and shoes as he smiled for the lens. Venkatesh, who stood next to Salman with a hand on his shoulder, opted for a black and olive green outfit.

For the get-together, Pooja wore a beige top, white pants and shoes. While Ram opted for a royal blue T-shirt and black pants, Upasana wore a salmon top and blue skirt. All of them posed inside Ram’s home. Alongside the photo, the caption read, “I’m one lucky puppy. Love, hugs & cuddles–all for me.”

Earlier this month, Salman met Chiranjeevi and Venkatesh in Hyderabad and a picture from the trio’s meet-up emerged on social media. In the photo posted by a Twitter user, politician JC Pavan Reddy was seen sharing the frame with Salman, Chiranjeevi, and Venkatesh. While Salman was dressed in a grey T-shirt paired with ripped denim, Chiranjeevi opted for an all-black outfit. Venkatesh donned a checked shirt that he teamed with a black T-shirt and denim.

As per news agency ANI, Salman will make a cameo appearance in Chiranjeevi’s forthcoming film Godfather. Venkatesh will be part of Salman’s film Kabhi Eid Kabhi Diwali. For the shooting for Kabhi Eid Kabhi Diwali, Salman had traveled to Hyderabad. The movie is helmed by Farhad Samji and produced by Sajid Nadiadwala.

This film’s title was initially announced by Salman back in 2022. The movie will also feature Pooja, Shehnaaz Gill, and Zaheer Iqbal among others. Kabhi Eid Kabhi Diwali is scheduled to release on December 30, 2022. He also has Tiger 3 with Katrina Kaif.

Meanwhile, Ram was last seen in Acharya with his father-actor Chiranjeevi. However, the film couldn’t leave a mark at the box office. He will be seen next alongside Kiara Advani in RC 15.