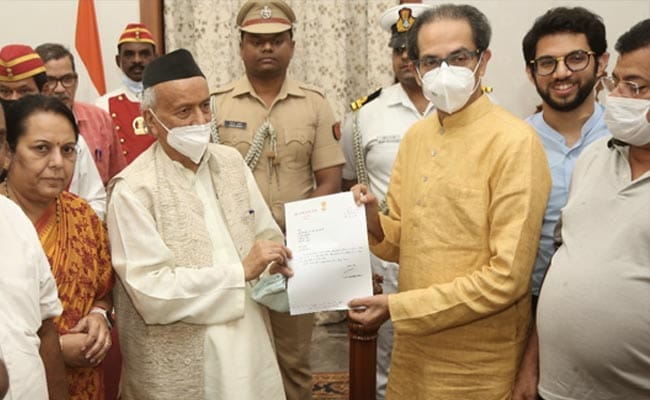 Uddhav Thackeray was accompanied by sons Aaditya and Tejas Thackeray at the temple.

The Governor accepted the resignation and asked Uddhav Thackeray to continue as CM until an alternate arrangement is made.

Mr Thackeray himself drove to Raj Bhavan and was accompanied by his son Aditya Thackeray. He briefly waved his hand as he submitted the resignation.

Thackeray had made the announcement about his resignation minutes after the Supreme Court on Wednesday allowed floor test in the Maharashtra assembly on Thursday.

“I am resigning as the Chief Minister,” he announced. He also announced his resignation as MLC.

The MVA government in Maharashtra has been facing a political crisis after a revolt in Shiv Sena. The rebel MLAs led by Eknath Shinde had been camping in Guwahati.

In his media address earlier, Mr Thackeray said that he was not going away forever and will once again sit in Shiv Sena Bhavan.

Mr Thackeray, whose party’s internal revolt brought down the three-year-old MVA government, said he came to power in “an unexpected manner” and was “going out in a similar fashion”.

Mr Thackeray also announced his resignation as MLC.”I had come (to power) in an unexpected manner and I am going out in a similar fashion. I am not going away forever, I will be here, and I will once again sit in Shiv Sena Bhavan. I will gather all my people. I am resigning as the CM and as an MLC,” he said.

Uddhav Thackeray became Chief Minister after Shiv Sena joined hands with Nationalist Congress Party (NCP) and Congress to form the government in Maharashtra. Shiv Sena leadership had differences with its pre-poll ally BJP and wanted the post of Chief Minister.

Uddhav Thackeray also expressed his gratitude to NCP and Congress, allies in the coalition government.

He referred to Maharashtra cabinet decisions taken earlier in the day. “I am satisfied that we have officially renamed Aurangabad to Sambhaji Nagar and Osmanabad to Dharashiv – the cities named by Balasaheb Thackeray,” he said.

The Supreme Court on Wednesday gave its go-ahead for a floor test in Maharashtra Assembly as it refused to stay the state Governor’s decision which was challenged by Shiv Sena chief whip Sunil Prabhu.

“We are not staying tomorrow’s floor test,” the Supreme Court bench said.

The court also issued notice on Shiv Sena Chief Whip Sunil Prabhu’s plea and said that tomorrow’s floor test will be subject to the outcome of the present petition. The court will hear his plea on July 11.

A vacation bench of Justices Surya Kant and J B Pardiwala had earlier in the day reserved the decision on the plea filed by Sunil Prabhu challenging Maharashtra Governor Bhagat Singh Koshyari’s direction to Chief Minister Uddhav Thackeray to hold the floor test on June 30 (Thursday).

Maharashtra Governor Bhagat Singh Koshyari had asked the Uddhav Thackeray government in the state to prove a majority on the floor of the House on June 30 stating that the “present political scenario” unfolding in the state paints a “very disturbing picture.”

The Governor wrote to the state Assembly secretary to convene a special session of the State Assembly tomorrow with the only agenda of a trust vote against CM Thackeray.

BJP leader and former Chief Minister Devendra Fadnavis had met the Governor on Tuesday evening after returning from Delhi and submitted a letter to him demanding an immediate floor test.