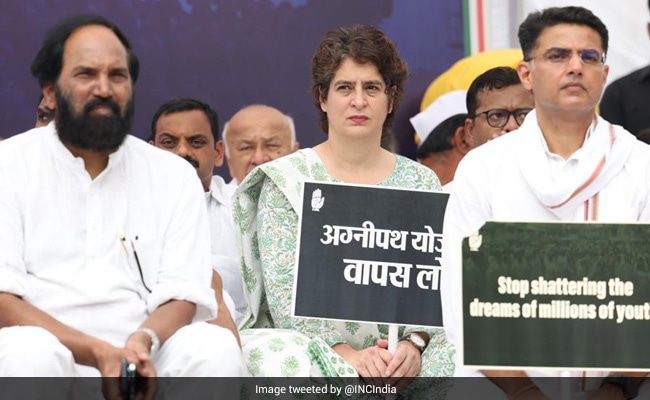 The Congress is holding a ‘satyagraha’ in solidarity with the youth protesting against Agnipath scheme.

New Delhi: Congress leader Sachin Pilot today questioned the expenditure of Rs 20,000 crore on the Central Vista project and the Rs 8,400 crore custom-made aircraft for Prime Minister Narendra Modi amid the protests over the new military recruitment scheme, Agnipath, that has seen huge protests over the new military recruitment scheme that has seen angry mob set fire to trains and damage public properties in at least eight states.

The government “must not be stubborn” and should roll back the ‘Agnipath’ scheme, senior Congress leader Sachin Pilot said.

The new scheme was announced on Tuesday to bring down the average age of personnel and reduce pension expenditure for India’s 1.38 million-strong armed forces.

In 2020, two custom-made B777 aircraft, estimated to cost around Rs 8,400 crore, were delivered by Boeing to fly Prime Minister Narendra Modi and other top Indian dignitaries.

The Congress is holding a ‘satyagraha’ in Delhi in solidarity with the youth protesting against Central Government’s Agnipath Recruitment Scheme.

Protests broke out in various parts of the country after the government announced the new scheme on Tuesday. In some places, the protests turned violent as trains were set on fire.

One person died in Telangana’s Secunderabad as the protests against the newly announced military recruitment policy spread to the southern state.

The protests have been reported in eight states, including Uttar Pradesh, Haryana, Punjab, Himachal Pradesh, Uttarakhand, Jharkhand and Delhi.

As many as 340 train services were affected on Friday due to youth’s agitation against the recently launched Agnipath recruitment scheme.

In a bid to pacify the protesters, the Home and Defence ministries on Saturday promised new 10 per cent quotas each in jobs for ‘Agnipath’ recruits after their four-year tenure in the armed forces. Union Minister Hardeep Singh Puri said that the PSUs under his housing and petroleum ministries are also working on plans to induct ‘Agniveers’.

The centre indicated that other departments too were working in the direction after several BJP-ruled states like Uttar Pradesh, Haryana, Madhya Pradesh and Assam announced various measures to encourage the youth to apply under the Agnipath scheme and assured them reservation.

The Home Ministry has further decided to give 3 years of age relaxation beyond the prescribed upper age limit to Agniveers for recruitment in Central Armed Police Forces and Assam Rifles.