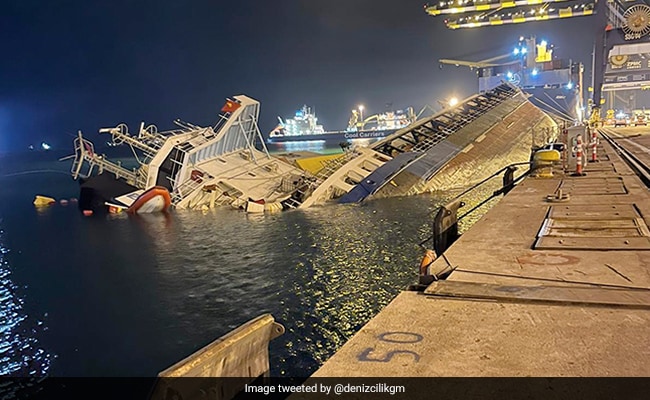 The ship named Sea Eagle suddenly sank while the cargo was being unloaded.

An Egyptian cargo vessel capsized in Turkey, sending a number of containers into the sea. A video circulating on social media shows the moment the vessel named Sea Eagle turning to the side and sinking. It was docked at Turkey’s Iskenderum port and the process of unloading the boxes was going in when the incident took place, according to TradeWinds, a website that reports on shipping news. The incident took place on Saturday, the outlet said, adding that the vessel was built in 1984.

The video of the incident on Reddit shows that a port lift truck was unloading the containers when the 3120 DWT cargo ship keeled over. The people standing near the ship immediately moved away after hearing a whistling sound.

The ship quickly submerged in water, leaving the crew members and people offloading the cargo shocked.

Turkey’s Ministry of Transport and Infrastructure later said on Twitter that 24 containers were lost from the Togo-flagged vessel and a minor oil leak was also detected.

Fortunately, all crew members were evacuated safely and no injuries were reported.

The government later issued a statement in which it said that the ship was suffering from stability issues and efforts to balance it did not yield results, according to another outlet G Captain.

The cause of the accident is being investigated by port authorities in Turkey. Meanwhile, the operation to offload the ship’s fuel and retrieve the container is currently going on.

The ship had reached Iskenderum from Mersin, also in Turkey, on September 17. As per the crew, all onboard systems were functioning normally till then.

Wildfires Rage Across France And Spain As Heatwave Singes Europe